An excerpt from Huntress by Christina Bauer (plus giveaway!)

Nine (And A Thousand) Years Old

Hide in the shadows.

With careful steps, I stalk my prey through the empty tunnels under the Bulwark Mountains. A stale and coppery smell fills the air. Around me, the rock walls glisten with condensation. Humidity presses against my skin. A single question repeats in my head.

My pulse beats so hard, I feel it in my throat. The metallic scent grows stronger. This time, the smell is undercut with the foul edge of brimstone. A bead of sweat rolls down my back.

The monster is close.

A series of low hisses snap through the air. Up ahead, a lanky humanoid lumbers into a pool of pale light. Instead of skin, this creature is covered in exposed red muscle. A cowl of bone loops around its head and stretches down its back. I suck in a shaky breath.

That’s my target. An orcneas.

You wouldn’t think I stand a chance against this thing. Sure, I’m a glass dragon shifter, but I’m only nine years old. Orcneas claws can easily tear through my leather body armor. There’s nothing about my dark eyes, brown hair, or strong bone structure that could help in a fight. I do have a tail in both my human and dragon forms, yet that won’t cause much damage against an orcneas. Not much does.

This monster should be able destroy me, no problem.

Only I’m not so easy to kill.

I’m the last of my family line, the Beaumonts. As such, I inherited memories from my ancestors. It’s a special kind of magic called transference. I think of it as the last chance for a dragon shifter family to keep their history. Essentially, I was born with an ancient mind inside a baby’s body. You’d be surprised how often it comes in handy, though. The orcneas should fear me, not the other way around.

Up ahead, the monster speeds around another corner. I rush forward as well.

Sadly, I don’t get too far. 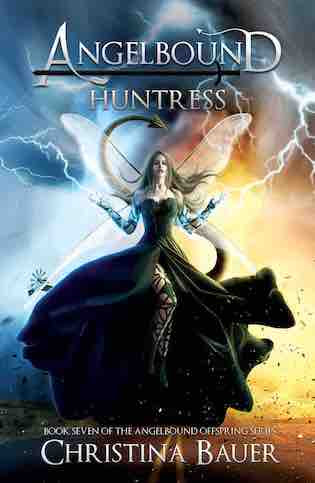 When it comes to protecting her family, eighteen-year-old Princess Huntress is known for kicking ass, taking names and then kicking a little more ass, just to be sure. She’s the last of her kind—a glass dragon shifter—and no matter what the threat, Huntress always tracks it down solo.

Then Huntress meets the leader of the L’Griffe crime family, Gage Beaufort, who is a dashing dragon shifter with a knee-melting stare. The attraction is instant, yet Huntress hates it. Why? Crime syndicates hurt royal authority, which means they threaten her family. Long story short, being with Gage is just wrong. Besides Huntress already has a rock-solid life plan, and that’s to fight alone, forever. No relationships, thank you very much.

But when a new danger threatens the royals, everything changes.

Now Huntress needs a mercenary army and fast, so she forges an alliance with L’Griffe. To protect those she loves, Huntress agrees to marry someone she loathes: Gage Beaufort. But will the extra help be enough?

Even worse, Huntress’ family isn’t the only thing at risk–the same is true for the princess’ heart. Because Gage is a man who always gets what he wants. In this case, the crime lord desires Princess Huntress, body and soul.

“With Angelbound Offspring, every page is entertaining… an exciting story that unfolds with magic, dragons, a little romance and a villain to despise.” – Tonja, Goodreads

Christina Bauer thinks that fantasy books are like bacon: they just make life better. All of which is why she writes romance novels that feature demons, dragons, wizards, witches, elves, elementals, and a bunch of random stuff that she brainstorms while riding the Boston T. Oh, and she includes lots of humor and kick-ass chicks, too.

Christina graduated from Syracuse University’s Newhouse School with BA’s in English along with Television, Radio, and Film Production. She lives in Newton, MA with her husband, son, and semi-insane golden retriever, Ruby.

Be the first to know about new releases from Christina by signing up for her newsletter: http://tinyurl.com/CBupdates