As part of the launch tour for my newest book, FAIRIES AND FROSTING, the lovely folks at Birdie’s Song’s Blog asked me to share a bit about my “why,” as in: Why do I write? Why do I write in this genre? And, why did I create this book?
Without further ado, here goes!

Why Do I Write?

Honestly? I have no idea. I just know that I’ve always wanted to tell my stories. As in, during the first grade I would stand up in the middle of class and start sharing. My teacher at the time, Sister Virginia, had to set up special story time for me at the end of each school day so I’d keep my yap shut. True story.

Why Do I Focus on YA Epic Fantasy?

As a teenager, I remember the revelation that was JRR Tolkien’s Lord of the Rings. Epic fantasy for the win! So that’s really what I imprinted on in terms of content. Also, epic fantasy brings fresh life to a character arc by having their journey take place in a space that’s ‘other,’ if that makes sense. It’s extra effort, but when it works, it really brings the story to life!

Why Did I Create FAIRIES AND FROSTING?

My absolute favorite fairy tale is the original version of Cinderella, which is what the Brothers Grimm called Ash Maiden. In this version, there’s no fairy godmother. Ash Maiden cries on a tree as she mourns her lost mother. Her dress, shoes and so on actually fall from that arbor. So it’s more of a story about the rewards of hard work and feeling your emotions. To date, there are seven books in the Fairy Tales of the Magicorum series, and so far, four of them have focused on Cinderella. After this installment, I’m going back to Sleeping Beauty as well as introducing a new character, Rapunzel!

And there you have it: three answers to some superb “why” questions! I hope you enjoyed my replies and I look forward to seeing you on a future blog tour! 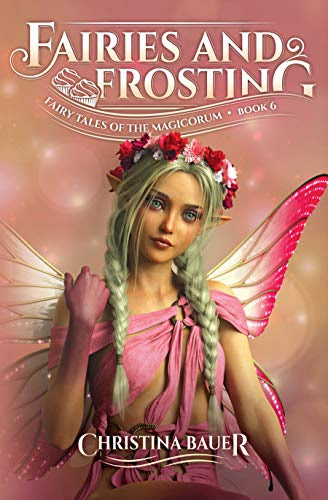 At last, Elle (never call her Cinderella) is reunited with Alec, the Prince of Le Charme Jewelers. Yay! But the pair soon discovers that Alec’s gemstone empire is about to go bankrupt. Boo. So our favorite couple devises a kick-ass scheme to save Le Charme. To announce their plan, Elle and Alec will hold a Glass Slipper Festival complete with music, dancing and cake. Lots of cake.

There’s only one problem. The Unseelie fae have returned.

Talk about bad news. No one combines lovely looks with dark intentions better than the Unseelie. Now, those nefarious fae want to destroy Elle, Alec and any hope for Le Charme. It doesn’t end there, either. The Unseelie are also targeting Elle’s stepsister, Agatha, as well as her old friend, Jacoby. And when will the Unseelie launch their deadly schemes? The Glass Slipper Festival.

Because fairies and frosting don’t mix.

“I thought the Angelbound series was my favorite, but Fairy Tales of the Magicorum may have stolen my heart.” – Smada’s Book Smack Blog

FAIRY TALES OF THE MAGICORUM
1. Wolves And Roses
2. Moonlight And Midtown
3. Slippers And Thieves
4. Shifters And Glyphs
5. Bandits And Ball Gowns
6. Fire and Cinder
7. Fairies and Frosting
8 Towers and Tithes

Christina Bauer thinks that fantasy books are like bacon: they just make life better. All of which is why she writes romance novels that feature demons, dragons, wizards, witches, elves, elementals, and a bunch of random stuff that she brainstorms while riding the Boston T. Oh, and she includes lots of humor and kick-ass chicks, too.

Christina graduated from Syracuse University’s Newhouse School with BA’s in English along with Television, Radio, and Film Production. She lives in Newton, MA with her husband, son, and semi-insane golden retriever, Ruby.

Be the first to know about new releases from Christina by signing up for her newsletter: http://tinyurl.com/CBupdates